A couple of weeks ago I had a stall along with other local authors at the local Lincoln Farmers’ and Craft Market. Once a month the market has a special theme, and for July it was books. In a sunny spot at the far end of the market, alongside the huge second-hand book sale, a group of authors sat bundled up against the cold chatting to a steady stream of people about their books. I fortified myself with bramborak—a Czech potato pancake—and hot blackcurrant juice from a nearby stall selling Czech food. Then all I had to do was sit back and chat to people and sell books. By the end of the morning I’d run out of stock.

Most book marketing efforts don’t involve sitting outdoors in the middle of winter. I’ve had a couple of lovely talks at libraries recently. The first was at a meeting of a book group run by the local library and coincided with the group’s anniversary. I’m not sure which was the bigger attraction—me or the very large, generously iced anniversary cake. The second talk was at a meeting of the Christchurch Friends of the Library. I hardly needed notes at either meeting and spent most of the time responding to thoughtful questions on topics ranging from how I wrote the book to coping with dementia.

It’s great news that people are reading my book. How do I know this? Partly because I keep a close watch on which libraries hold the book. I also look at whether any copies are on issue, and have been delighted to see that lots are on issue throughout the country. So, word must be getting out there.

I see the book on the shelves when I go into a bookshop, but what I don’t know is how many people are actually buying it.

Another way I know that my book is being read is from feedback from people who have bought it.

I’ve discovered that someone will buy the book and then hand it on to another person, or sometimes two or three other people. Great! One of the reasons I opted for a print book, rather than an ebook, was that I thought readers might well want to lend their book to other people or pass it on. So, it seems I was right on that score.

When I wrote the book I had a lot of things I wanted to say about dementia and it was very, very important to me to get the book into readers’ hands. But there is a little sting in the tail—I have discovered that readership does not equal sales.

Although sales are ticking along nicely, it’s just as well I don’t define success purely in terms of sales.

In my last post, I commented that the workload and learning curve don’t slacken off once a book is launched. This post looks back at just what was involved in getting as far as the launch. Back in January this year when I decided to go ahead and self-publish, I happened to see a post on author Catherine Ryan Howard’s blog where she listed all the steps in self-publishing one of her books as an e-book and a POD paperback.  I love making lists, so I immediately started my own, but mine is for a traditionally printed book.

This is just a summary; it doesn’t take into account how long it took to complete some of the tasks or the hours of figuring out how to do some of them. And it doesn’t even hint at the previous two years of research and writing. The best thing about this list, for me, is I can use it as a starting point if I ever embark on another self-publishing adventure, although I probably wouldn’t do it quite the same way again.

Even though I stopped my list at item #40, the work is never-ending. Sure, having a distributor lessens the workload, but I’m still busy marketing and hardly a day goes past without me doing something related to getting word out about the book. Yesterday it was a presentation and today it’s a blog post.

Such a lot has happened in the ten days since I launched What Are You Doing Here?  I thought the learning curve would flatten and the workload slow down after I’d launched the book.  Not so.

I expected marketing to take up lots of my time, and it has. I’ve arranged talks to community groups and recorded my first radio interview and started sending copies out for review.  What took me by surprise was how much time and effort is involved in distribution. I was dimly aware that this could be time consuming, but I underestimated just how much is involved in processing orders, preparing invoices, packaging books and running down to the Post Office.

An unexpected turn of events

I sent a copy of the book to a buyer at a large bookseller and almost forgot about it because I expected that even if they liked the book, they would not want to deal with a self-publisher. It turns out they did like the book but would be interested in taking it only if I had a distributor. How long did it take me to arrange a distributor? Slightly over 24 hours.  A few days later I delivered a load of books to the distributor. 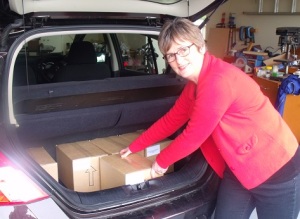 What’s so great about a distributor?

Far fewer boxes of books in the spare room. I know that just because the boxes are gone doesn’t mean the books are sold, but I kept my print run small, so I was never going to be left with a ridiculously embarrassing number of unsold books. Still, it was daunting seeing the boxes.

No more messing with paper, parcel tape and bubble wrap and no more hanging around in queues in the Post Office.

Simplified business procedures because the distributor will deal with the bookshops.

My book in bookshops!

I can get back to writing.

I love going to book launches. I’ve been to a few over the last few years—mostly local authors—but on Sunday it was my turn when I launched What Are You Doing Here? Reflections on Dementia.  As a self-published author, this was very much a do-it-yourself affair—a morning of making sandwiches and savouries and chilling the wine, followed by a relaxed gathering on a perfect spring day.

One of the nicest things about the day was that some of the people I interviewed for the book were able to attend. They have all been involved in caring for people with dementia, and were unstinting in their time and willingness to talk to me when I was researching the book. It was a pleasure to see them again, especially as September is World Alzheimer’s Month and the theme is ‘A Journey of Care’.

I made a healthy number of sales and was delighted when the next day I made almost as many sales again. It’s starting to feel as if I’m gaining a bit of momentum.

In these days of e-books and print on demand, why would any writer publish their first book using traditional print? It means paying all the costs of printing upfront and taking the risk of ending up being out of pocket if sales aren’t enough to cover the costs. Nevertheless, that’s what I’m doing–I’ve decided to self-publish ‘What Are You Doing Here?’ as a print book.

Before going down this path, I thought carefully about how people might want to read and buy my book and how I can reach my market. I came up with what I think are a couple of good reasons for choosing print. Reason number one: my hunch is that people who will prefer to read it in print; they might like to go back to it after they have read it or perhaps lend it to someone else.  Reason number two: with e-book and print on demand options distribution is mainly online (you go to a website to order the book). But I intend to get out and talk to people, and selling books direct is a main plank in my marketing plan. I need a print book for that.

I wouldn’t necessarily make the same decision for a different book; nor have I ruled out the possibility of doing an e-book later on. Of course, I could fall flat on my face and end up with the spare room full of unsold books. I’m taking a risk, but the print run is small enough for me to be reasonably optimist that I can sell enough copies to cover my costs. The plan is to start small and local and then grow.

The book is at the printer now, so there’s no going back.

I did try to get the book published and received a lot of very positive and encouraging feedback, especially about the writing. In the end it wasn’t commercial enough for a traditional publisher. However, I realised that ‘no’ from a publisher does not necessarily mean the book is no good. A publisher will only take on a book that they are sure will be a commercial success, and that’s not easy in a very small market like New Zealand. A self-publisher, however, might be able to afford more modest aims and a more hands-on, personal approach to marketing. I decided to back myself by self-publishing. Let’s see whether it was a good decision.